In late 2019 and early 2020, the peace of Wiveliscombe was disturbed by helicopters flying low over the Southern part of town to a new shooting lodge built off the the main road to Waterrow and close to Culverhay, Culverhead and the Recreation Ground.

Planning approval for Bulland Estate to convert a barn to a shooting facility had been given in February 2019, but the application had made no mention of the helipad or the luxury accommodation rumoured to have been included in the conversion.

During 2019, I received complaints and expressions of concern about the new development, which I raised with Somerset West and Taunton Council. Planning enforcement action soon followed.

The barn conversion built was found to include a whole additional floor of bedrooms as well as the helipad, which had not been included in the original planning application.

The owner was informed a new planning application had to be submitted to allow the Council to decide if the unapproved development could be retained or if it would have to be altered or removed.

Initially, this led to a variation to the original planning application being submitted in November 2019 for an additional floor showing eight rooms. This was withdrawn when the Council would not accept this scale of change as only being a variation.

When the shooting season commenced, Wiveliscombe found itself on a flight path for low-flying helicopters landing at the new lodge, both during the day and, after dark, in the evening.

Instead of a retrospective application to cover the whole development, a separate application then followed for the helipad only in December 2019. A second application for the shooting lodge did not follow until June 2020. This showed the additional floor had ten en-suite bedrooms, instead of none in the original application and eight in the withdrawn variation.

There was strong local opposition to the helipad application, which was considered by Planning Committee in May 2020. Many local objections had been submitted. Cllr Blaker and I spoke against the application at the committee meeting and written comments were read out from the Town Council and six local residents. Unfortunately, approval was narrowly given with seven councillors voting in favour and five against.

Following the meeting, I received an email from the shoot owner, who said:

“When watching the webcast of the meeting, I was surprised and quite shocked by the level of antagonism towards both our shoot at Bulland and the landing of helicopters at this location. Upon reflection, I apologise and concede that, despite our best efforts to avoid overflying the town, we misjudged local sentiment and should have engaged further with the community in advance of our proposals.

“Taking your comments and those of others on board, despite the permission that was granted, I confirm that we will be removing the helipad from this location. We will endeavour to find an alternative landing spot elsewhere on the estate, further away from Wiveliscombe, in order not to disturb and inconvenience the residents in these populated areas.”

The removal of the helipad indeed followed soon after.

New footpath and the shooting lodge

In further correspondence, Bulland Estate agreed to allow a new and welcome permissive footpath over their land from opposite the bottom of Challick Lane to the public path further down, which goes behind Coate Farm in one direction and to Culverhay in the other. This includes a stile by the main entrance gate, as shown in photo below. 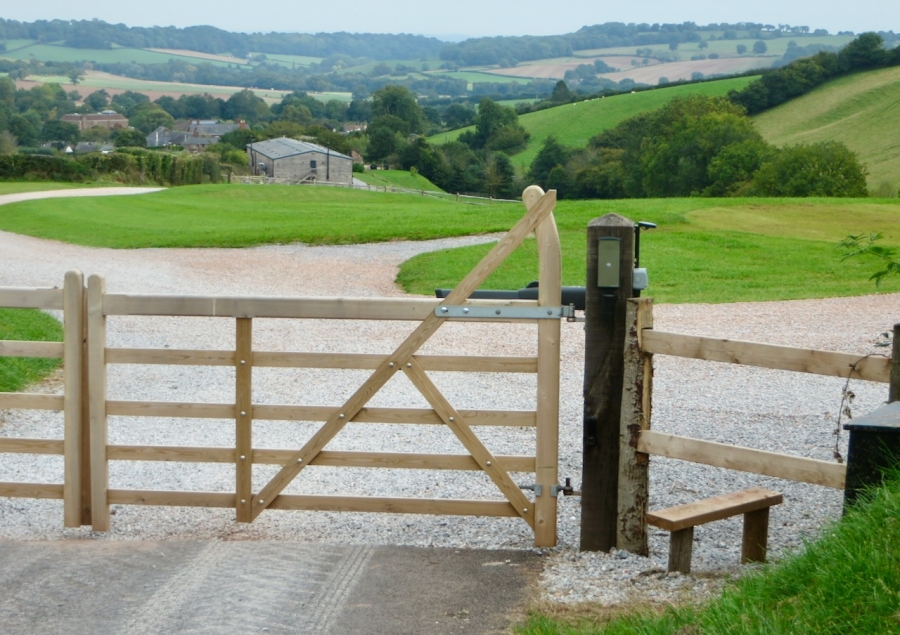 I was also told the shoot “looked at a couple of potential landing locations however it is now likely that we will use Dunkeswell Aerodrome wherever possible and transport guests from there using local private hire firms.”

The shooting lodge application was considered by Committee in September 2020. I was unable to attend, but submitted written comments, which were read out at the meeting. Approval was again given with eight councillors voting in favour and five abstaining.

The officer report and several on the committee gave considerable weight to the local economic benefits of the shoot in reaching their views. There are positives, but I can’t ignore the downsides too and, like some, wonder how the shooting lodge may be used in future. A planning condition currently restricts its use to the shooting season only from 1st October to 1st February.

In my view, downsides of the shooting lodge include the noise of nearby shooting, which can be heard in parts of the town, and the large release of alien game birds, which have an effect on local biodiversity and are often found on local roads and in our gardens. From a climate and energy perspective, I do not support development that relies on long distant travel to bring in distant customers by helicopter. I also have little enthusiasm for the ‘sport’ of shooting birds and would much prefer to see less destructive leisure activities.

My submissions are shown with my other comments made on planning applications.

Click here to sign up for occasional emails with updates on local and council news. Your details will not be shared with others.